Daily Debate: In Which Split of the Official Zelda Timeline Would You Prefer to Live? 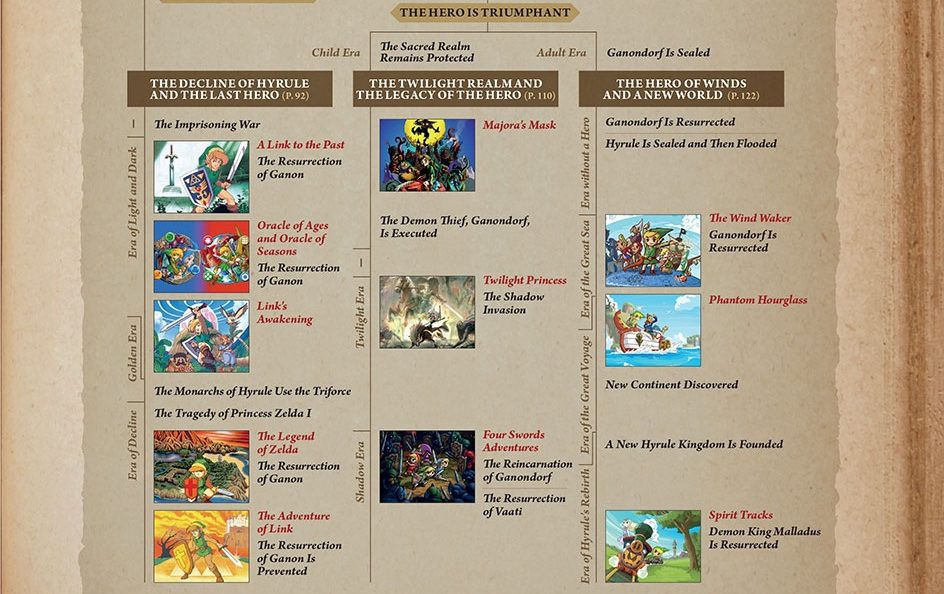 The official Zelda Timeline is one of my favorite things in the entire franchise.  It’s a really cool piece of information that creates structure within the Zelda universe, and at the same time, adds more depth to the series’ lore.  I also really love that the split in the timeline stems from Ocarina of Time, which is my all-time favorite game ever.  Finally, I quite enjoy the debates surrounding that split, such as whether it should be accepted, or whether it even makes sense at all.  Now, talking of timeline debates, I want to know in which split of the Zelda timeline you would prefer to live.  Here’s the catch though, you can’t choose which specific part of the split you’re going to be born in to.  You might get lucky and live in peace, or you might not!

Let’s break it down ever so slightly: The Fallen Hero split includes events that happen in A Link to the Past, Link’s Awakening, A Link Between Worlds, Tri Force Heroes, The Legend of Zelda, and The Adventure of Link.  Hyrule plays host to the Imprisoning War, faces a an onslaught of misfortunes, and the endless struggle for the Triforce continues, as it must.  And then, just when everything seems to be going well and we’ve entered the aptly named Golden Era, the Era of Decline sneaks up behind us and obliviates our contentment.  Don’t worry though, as peace returns to the realm eventually.

Next up, we’ve got the Child Timeline which is subject to the events of Majora’s Mask, Twilight Princess, and Four Swords Adventures.  Ganondorf — the man and not the boar-like monster from the Fallen Hero timeline — just keeps coming back, whether it’s by backstage political usurping, resurrection or reincarnation.  He isn’t just taking over Hyrule and its surrounding kingdoms and lands, he’s casting his shadow over completely different worlds and realms!  There seems to be no escaping this guy who, having been blessed with the Triforce of Power, seems to have the support of even the gods themselves!  All this, and we haven’t even hit on the fact that the Moon can come crashing down to destroy the world if you happen to be caught up in Termina!

Finally, we’ll look at the Adult Timeline.  Here you’ll find the events of The Wind Waker, Phantom Hourglass, and Spirit Tracks.  Hyrule is drowned in a terrible flood sent by the gods when Ganon inevitably escapes and brings darkness upon the land.  This is fine for those chosen few who are permitted to build a new world, but what of those who didn’t make the cut?  Well, they were simply frozen in time.  Eventually, New Hyrule is founded and it thrived, but there’s always one bad guy who’s out to ruin everything.  Luckily, he’s defeated, and New Hyrule looks as though everything will be just fine after all.

But wait!  This isn’t the end!  After everything that’s happened across all three timeline splits, Breath of the Wild still has to take place.  So guess who’s back, back again?  Ganon’s back, tell a friend!  Calamity Ganon strikes not once, but twice on the land of Hyrule.  And this is where things get very post-apocalyptic.  The kingdom is ravaged my both monsters and machines, and it seems as though you can’t even go hunting for truffles without being attacked.  Now, Nintendo have left it up to the interpretation of the player to decide on which timeline split this game belongs, so that might make choosing your preferred timeline a little easier — or not!

For me, I’d probably choose to live in the Child Timeline.  If things went well, I might be born in to the time just before the failed execution of Ganondorf, so I’d feel safe enough for at least a short while.  The alternatives aren’t too inviting; there are too many ups and downs in the Fallen Hero Timeline, and I just don’t fancy being frozen under the water within the Adult Timeline (such would be my luck).  I also think Breath of the Wild seems to fit at the end of the Adult Timeline, so I’d avoid that whole palaver as well.

So, which split of the Zelda timeline you would prefer to live?  Do you agree with my choice, or would you make an alternative decision?  Let me know in the comments below!