Culture Shock: The Origins of Epona 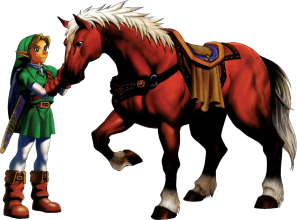 Despite appearing in only three core Zelda games as a mount (and in The Minish Cap as an NPC owned by Malon and Talon), Epona has left quite the impression on fans of The Legend of Zelda. She’s a way to move around quickly, circumvent certain obstacles and allows Link to engage in awesome battles in Twilight Princess. In the three adventures she appeared in she has been a faithful companion of Link, helping him save Hyrule and Termina, in two cases on nothing but a diet of carrots. Of all of Link’s red animal companions (Dimitri, the King of Red Lions, Link’s Loftwing) she is by far the most beloved of the bunch. But is there any real-life basis to her name and what she can do? The YouTube channel The Game Theorists take a look at this, with the latest video in their Culture Shock series. Watch the video after the break!

Luckily Link does not treat Epona like horses were treated back in the day. At the end of the video Gaijin Goombah raises an interesting idea: what if Link’s companion in Zelda Wii U is none other than Epona herself, capable of turning from her animal form into a human form and vice versa? What do you think of this idea, and what do you think about the video? Please share your thoughts in the comments below!