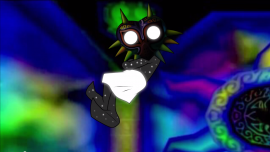 Gaijin Goombah is back with yet another video exploring the possibility of Majora’s Mask originating from African culture. After examining the different bosses in the game and connecting the usage of masks to African roots, he attempts to explain the “true origin” of Majora itself. He claims that Majora was based on a South African folk story called The Moon-Child. Even though there isn’t much information on this outside of a single reference, he’s pretty convinced that this is what the concept of Majora was based off of.

The Moon-Child is a very interesting story that could very well be where the idea of Majora originally came from. It definitely has a lot of similarities with the game, especially when it comes to Majora’s personality and the Moon Children. However, when he starts comparing the events in the game with the original folk story, claiming it to be a different version of it, that’s when it starts losing its appeal to me. It felt like he was stretching it out a bit, trying to make every small detail fit into this theory. Even if Majora was based on this story, that doesn’t mean every single aspect has to correlate with it somehow, especially if it’s just that — a concept from which they drew inspiration from. But hey, that’s just my opinion. If you think any differently or would like to delve further into this theory, let us know in the comments below!