Posted on February 05 2015 by Alexis Anderson 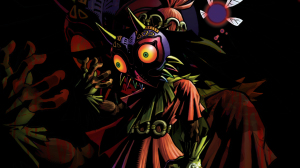 The reviews are finally in and Majora’s Mask 3D has not met with a terrible fate! Though the game releases next Friday in most countries, critics were able to get their hands on advanced copies and they were not disappointed, well most weren’t. Metacritic compiled a list of the reviews done thus far, and out of more than thirty reviews only eight gave the game a rating of less than 90 out of 100. Some of the most reputable review sites had nothing but positive things to say about this 3DS remake of an N64 cult classic.

The rest can be viewed on Metacritic’s website, and Metacritic averaged a score of 90 for the game. Amazingly, Majora’s Mask 3D earned a perfect score of 100 from both Nintendo Life and Pocket Gamer UK. It’s lowest review score as of now is an 80, which was given by Destructoid, Shack News, and Digital Spy.

Some of the major positives mentioned by critics were:
The visuals were greatly improved and make good use of the 3D, all this without losing the atmosphere of the game felt when playing it on the N64. The three day time mechanic is also improved to be more easily navigated; the ocarina helps control time flow and the Song of Double Time allows players to warp to any hour now. The time restraint adds a rushed tension that makes completion of different goals feel important and satisfying.

Gameplay is more convenient now as well, the ocarina and pictobox have buttons assigned to them alone, enemies and people can be seen on the map, and maneuvering is just smoother in general. The Bomber’s Notebook is more descriptive and can set alarms for different events, players can save at any time they want, the characters and quests are all unique, and the transformation masks allow for varied play especially in boss battles.

Some of the aspects that lost the game points were:
Certain side quests felt dated and still cumbersome due to the time constraints, there are masks that are virtually useless outside of their main quest, the visuals still wouldn’t be considered amazing by common-age standards, and mini-boss fights can be repetitive. There are only four major dungeons, and not all of them are as amazing as would be hoped; Stone Tower Temple is very rewarding, while Great Bay is just annoying. And the complexity of the different character storylines in addition to the time changes can get confusing, especially on a handheld platform where some players will drop the game and not have any clue what they should be doing when they pick it up again.

Overall:
The game is a lot more convenient, but still maintains the amazing story and atmosphere it had on the Nintendo 64. One thing most critics agree on is that Majora’s Mask is still one of the most inventive and dark Zelda titles to date, and the 3D version reinforces that.

What kind of review scores were you expecting for the game? Did these fall short, or exceed your idea? Do these rave reviews make you any more excited for the game? Let us know in the comments!