Cave Story Breaking Into 3D, Due Out This Summer

Posted on February 11 2011 by Nathanial Rumphol-Janc 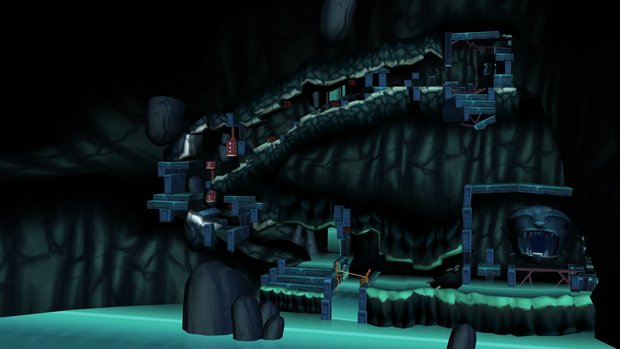 GamesRadar’s interview with the game’s creators revealed some interesting tidbits about why this remake is coming about, what they want it to achieve, and what new goodies they’re adding to make the game feel like a new experience. Some highlights:

GR: Is this primarily based off the WiiWare version of the game, or is there added content, or any differences that you can talk about yet?

TR: Primarily, this is based off of the original game. In a way, it’s almost like a true 3D remake from scratch. So we’ve added a couple of things that Daisuke and I have gone over, as far as some secrets and some Easter eggs that are going to make some of the original fans really happy, and it’ll also add some longevity for the game for anybody who’s playing it, and sees these grand new areas that we’re adding, as well.

So far it’s sounding very much like the approach we saw with the remakes of classic Zelda and Final Fantasy titles over the years, which is a heartening thing to hear as that likely means they’re going to hold tightly to its retro feel and to their fans while still giving the game that extra oomph that’ll make it appealing to a modern audience. Definitely a much more holistic approach than a straight port, so mad props are in order.

GR: Cave Story’s a pretty huge game, especially for one person to create everything. How did you decide to start on a project of that scope by yourself? Was it just something that started small and became big?

DA: Because I was creating Cave Story by myself, it was a little different from how a regular game is built. What happened with the original is, I started off with this blank, black screen. And I had the character just standing there, moving around, jumping around, doing various things. The most fun part of creating a videogame is when you first create something that’s moving around, and you’re able to control it. And then once you get that, you start to visualize what to add, like “I want to add this thing here, and this here, and the background there.” They slowly built upon each other. So for the original Cave Story, I didn’t necessarily have a big plan to build on, but started from something small and added to it.

I’m both the creator and the tester of the game, so I’m playing, testing out the game, and if I don’t feel that the gamer, or the player, is going to be satisfied with the stages, I’ll go back and add even more to it. Once I realized I had this big, grand game, the story part was basically putting it together, adjusting it to make a little more sense than what I had originally. So again, it’s just adjusting at the very end, when I realized I had the whole world setting there. But you can only do this if you’re making the game by yourself. If you have a team, that’s not going to work.

I find this tidbit especially interesting, because it’s true – it often does seem that the large, big-budget games have to have these grand stories and worlds and graphics and so on, and so they’ll have large teams for handling each aspect of the game separately. And sometimes there’s a degree of disconnect that can be very evident in the final product.

Take Other M, for example. Its story was told entirely through cutscenes, which was a sort of dramatic departure from Metroid Prime where the story was subtly conveyed through atmosphere and hidden bits of information scattered throughout the world. Those cutscenes lacked the player-driven core that defines gaming as a storytelling medium, and as a result a lot of people didn’t really enjoy the story presentation despite the flashy big-budget video sequences.

Now, I loved the game regardless, but I can really appreciate the more organic feel that a game handled by one guy, or even a small team, can deliver. I hope to be a game designer someday (although English teacher is looking more and more likely), and my biggest worry has always been “how can a little guy like me make it in a world where gaming giants dominate?” But it’s games like Cave Story and Minecraft, where the Indie approach is the recipe for success, that give me hope that maybe my dream will one day work its way out of the pipes.

Yes, it’s still going to be side-scrolling, but it still intends to make good use of the 3D effect. I guess we’ll see just how well it does at that come launch day. Cave Story 3D is planned to hit the 3DS this summer. Check out more awesome visuals and the full interview at GamesRadar.