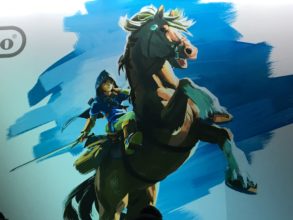 Considering that we are nearly a month removed from E3 2016, I’m — admittedly — skirting the edge of timeliness here. Heck, I’m probably well past it. In any case, I had the opportunity to spend about half an hour with The Legend of Zelda: Breath of the Wild at this year’s expo.

Going into the show, Link’s next adventure was just about the only game on my mind. I mean, I was looking forward to other titles, but my drive to attend E3 for the first time stemmed mostly from the chance to experience the future of Hyrule. Head past the jump to check out my full thoughts on what was unveiled!

On paper, Nintendo’s opting to focus almost solely on one game at E3 sounds like a disaster. With the NX less than a year away, the company has definitely been winding down the Wii U. Before the expo, many speculated that this decision to present an “immersive Zelda experience” was Nintendo’s way of covering up a relative lack of software throughout the rest of the year. Although there’s still probably some truth to that, the gamble paid off. Indeed, had the big N done this with virtually any other game — even a new Super Smash Bros. or a core, 3D Mario platformer — I don’t think it would have been nearly as successful.

Unlike the scripted demos that largely populate the E3 show floor, Breath of the Wild’s is such that no two people will play through it the same way. Encompassing roughly one percent of the overall world map, the Great Plateau is just chock full of secrets to uncover and places to explore. You’d think that, like with previous Zelda entries, one region would stick to a particular theme. However, the Plateau is surprisingly varied. From the ruins of the Temple of Time to a boar-inhabited forest to a frosty river and its accompanying mountain range, there’s so much to take in. 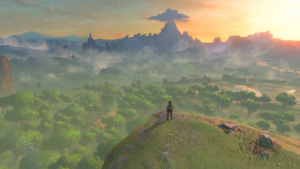 Although I caught glimpses of these landmarks throughout my session, most of my time was spent near the region’s center. Early on, I attempted to jump off the cliff shown above and test out Link’s Paraglider — you know, just to admire the vastness of this rugged terrain. Of course, I immediately learned the hard way that the first 15-minute demo didn’t feature the new item. The Nintendo representative did his best to alert me, but by then it was too late.

From there, I spent the rest of the demo just testing out the game’s new controls and mechanics. It’s clear that Breath of the Wild aims to represent a new beginning for the series, similarly to how Ocarina of Time set its own course for home console Zelda games. That said, certain series staples have been subdued this time around. The chest opening theme, for instance, boasts neither the traditional animation nor the bombastic flare of previous titles. The theme still exists, but it’s much more softened. Additionally, considering the game’s emphasis on gathering materials for crafting and cooking, it makes sense to remove the item pickup animation. The former change fits the tone of this particular adventure, while the latter just speeds up the pace. 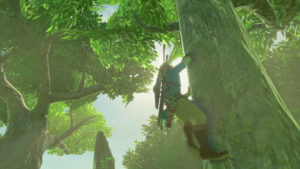 Meanwhile, the climbing mechanic feels like a logical extension of not only what was introduced the first time Link climbed a vine wall inside the Deku Tree, but also Skyward Sword’s stamina meter. I can just see this opening the door to so many possibilities in the full game. Perhaps there’s a one-of-a-kind weapon or item that can be found only by making a particularly long and treacherous ascent. If nothing else, this addition is incredibly handy, as it saved my skin on the couple of times I accidentally stepped off the edge of the Plateau.

Speaking of items, though, Link’s lack of any signature weapon — at least until he inevitably acquires the Master Sword — is definitely one of the game’s biggest curve balls. This takes Wind Waker’s ability to steal enemies’ weapons and makes it a fundamental aspect of the experience. Coupled with the lack of hearts — Link heals himself by cooking ingredients he finds on the map — there’s, again, a ruggedness to Hyrule that we haven’t seen until now. I just hope to see Nintendo get more creative with the kinds of weapons Link can get his hands on. With an overworld this massive, there’s got to be some unique stuff out there.

Based on the half-hour session I had with the game, Breath of the Wild looks poised to deliver on the promise that was hinted at during E3 2014. Although the demo takes cues from other open-world adventures, it brings enough new elements to the table to give it an identity all its own.

For my thoughts on the game’s story-based demo, head over to WantMidnaBack.com.