Bomber’s Notebook #010 – Zelda: Better With or Without Magic?

The Magic Meter was one of the staples of the Zelda franchise, the icing on a beautifully, appetizing multi-layered cake. It seems that with recent console installments, Nintendo has been trying to do away with this classic mechanic and replace it with other depleting meters like the Stamina Meter. The trend started with Twilight Princess and there is no end in sight.

Now the recent Zelda games have been spectacular and still maintain a strong, undeniable fantasy setting that does involve Magic, but one can’t help but miss the ol’ Magic Meter. It was and will always be one of Zelda’s defining features and I’m partially glad that Nintendo has decided to make changes to the formula, but is the series better off without it? Or would Zelda fare better if the Magic Meter was still in use? These are two formidable questions indeed.

No doubt that Magic in Zelda has become embedded in our hearts over time. Some people could even argue that the newer games don’t feel right without it. It doesn’t seem that the Zelda games that did feature the Magic Meter performed more spectacularly than the newer games commercially nor critically, but for many the quintessence of the franchise was in fact the wonderment of using Magic-powered items. While I do appreciate the Magic Meter, Zelda is doing just fine without it and will continue to flourish. Make the jump to read more!

After all, many consider The Legend of Zelda a classic and it didn’t have Magic. In fact, only The Adventure of Link, A Link to the Past, Ocarina of Time, Majora’s Mask and The Wind Waker even feature it. Magic is not a necessary element of the Zelda formula. It may enhance gameplay and allow for the use of certain items, but more likely than not those items were not the most vital items in Link’s arsenal. They may have had nice abilities or were flashy, but at the core of the Zelda experience is good gameplay, and items that drain Magic will usually be enhancements or just seldom-used. 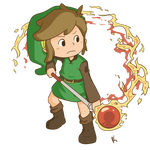 In A Link to the Past, the Lamp, Fire Rod, Ice Rod, Cane of Byrna, Cane of Somaria, the Quake, Ether and Bombos Medallions, Magic Powder and the Magic Cape all draw from Link’s Magic Meter. While Link will probably need to use most of them at some point in the game, they’re usually not that useful for making actual progress in the main quest. The trend continues into Ocarina of Time, where Magic also plays a more minimal role than some would like to believe.

Speaking of Ocarina of Time, it is primarily used as fuel for items and spells. Din’s Fire, Nayru’s Love and Farore’s Wind are each useful in their own right, but Din’s Fire is the only spell of the three that is necessary to complete the game. Link can also enchant his Arrows with Fire, Ice and Light. Ice Arrows themselves are an optional item and have no significant use, as is the case with Fire Arrows. However, the Light Arrow is needed to proceed and actually plays a crucial role near the end of the game, but Arrows that drain Magic in Ocarina of Time are generally insubstantial.

The Lens of Truth makes use of Magic as well, and honestly I think this is one of the better ways to utilize the Magic Meter. It has uncanny powers and, given the usage of this item, it makes perfect sense that it would deplete the Magic Meter. I will have to criticize the Magic Spin Attack, however, as it was very simple to create a Spin Attack that doesn’t deplete Magic whatsoever. It doesn’t even really make sense to have it drain the bar, as any seasoned player will have the Spin Attack shortcut on lockdown.

Majora’s Mask handled the Magic Meter better than any of its predecessors by introducing masks that draw on the meter. Magic power fuels several special moves that are executed by Deku Link, Zora Link and Goron Link. The Fire, Ice and Light Arrows make a return, though the existence of the three types aren’t really necessary. Regular Arrows would probably suffice in triggering targets in the game, so the inclusion of different types of Arrows doesn’t make sense. Now if Nintendo found a more creative way to apply Fire, Ice and Light Arrows, I would completely approve of their continuance in future Zeldas. However, it seems as if the concept has been eroded over time and Nintendo has moved on. 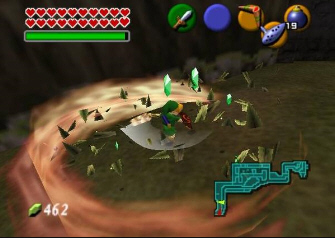 The Magic Spin Attack makes a return in Majora’s Mask, but the shortcut still exists. It is just as easy in this game to execute the attack without using Magic as it was in its prequel. The Giant’s Mask and Fierce Deity’s Mask, like the transformation masks, make use of the Magic Meter in a fathomable way. The Giant’s Mask mutates Link into a gargantuan version of himself while the Fierce Deity’s Mask transforms our hero into the Fierce Deity, an omnipotent being whose sword beams rely on Magic. Naturally, taking the shape of different races and beings is a supernatural quality that is best handled using Magic. Majora’s Mask is an instance where I believe that the inclusion of Magic truly benefited it. 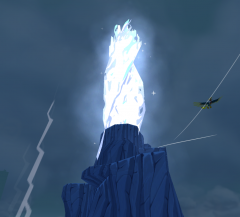 Whoa, Ice Arrows can do that? Holy lobsters…

Elemental Arrows emerge once again in Magic’s last canon appearance: The Wind Waker. As is usual, these special types of Arrows are only necessary for small segments of Link’s journey, but they make up for it in their usefulness against enemy mobs. They’re more fun to play around with in this installment, as Ice Arrows actually encase enemies in blocks of ice, thereby immobilizing your foes. Ice Arrows and the Skull Hammer make a deadly combination. Fire Arrows will set them ablaze, dealing extra damage over time. Light Arrows are incredibly potent as a weapon, obliterating most enemies in a single shot.

The Deku Leaf uses Magic, and it has its pros and cons. The leaf generates an unprecedented amount of wind when used to blow away enemies, and that should warrant the use of Magic. However, Link’s Magic Meter also takes a hit when he jumps from high ledges and uses the Deku Leaf to float safely to a platform.

Maybe the leaf has super amazing floating abilities? I don’t know, this attribute doesn’t seem like it really needs to take a toll on the meter. Last but not least, the powerful Hurricane Spin move Link learns from Orca also uses Magic as fodder. Logically, a Spin Attack as lengthy and unnatural as this should use Magic, and I think Nintendo hit the bulls-eye with the Hurricane Spin. Overall, The Wind Waker was able to make decent use of the Magic Meter, but overall it isn’t a bare necessity.

The Magic Meter has only been featured in major console releases, excluding Twilight Princess and Skyward Sword. Considering that these two titles have been very successful commercially and critically, it’s difficult to say that Zelda is better overall with Magic. After much thought, I firmly believe that Magic does not make a substantial difference in the quality of a Zelda game. In fact, I’m positive that most Zeldas that do feature the Magic Meter could’ve been designed just as well without it.

Compared to key elements such as controls, puzzle/level design and atmosphere, Magic doesn’t seem like such a vital piece of the Zelda puzzle. I don’t think that it really makes a difference either way. Most of the time, there just aren’t enough important appliances for Magic to commission its presence. I did enjoy The Wind Waker‘s and Majora’s Mask‘s utilization of the meter and hope that one day Nintendo will develop another game with Magic for nostalgia’s sake.

But you saw that coming, didn’t you?

So do you think Zelda games are better when they do have the Magic Meter? Do you want to see the Magic Meter make a comeback in future titles? Feel free to let us know your thoughts in the comments section below!