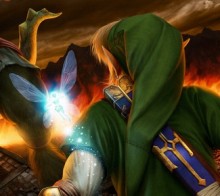 Recently, mattleese87 of deviantART posted a portrait of Link facing off against his greatest foe in Ocarina of Time. The picture is meticulously drawn, from the texture of Link’s tunic and the scratches of his battle-worn Hylian Shield to the ill-lit clouds in the background. The artist claims that it has taken him since October to complete the piece! He also created a version of the portrait that includes Ocarina of Time‘s control interface to make it feel authentic. It is able to capture the mood of the battle against Ganon perfectly. That brooding, overcast, lightless, deathly atmosphere set by the environment of the battle and the caliber of the situation. Make the jump to see “Battle for the Triforce III” and its alternate iteration.

“Battle for the Triforce III” is amazingly detailed, as the original picture is 5400×3600. Click on the picture below to see the whole thing! It is almost certain to blow your mind. The rubble and tiles on the ground are so ridiculously detailed, it’s tough to fathom how many long and tedious hours it took to create this masterpiece. mattleese87 was kind enough to create a version with the standard Ocarina of Time control interface for nostalgia’s sake. 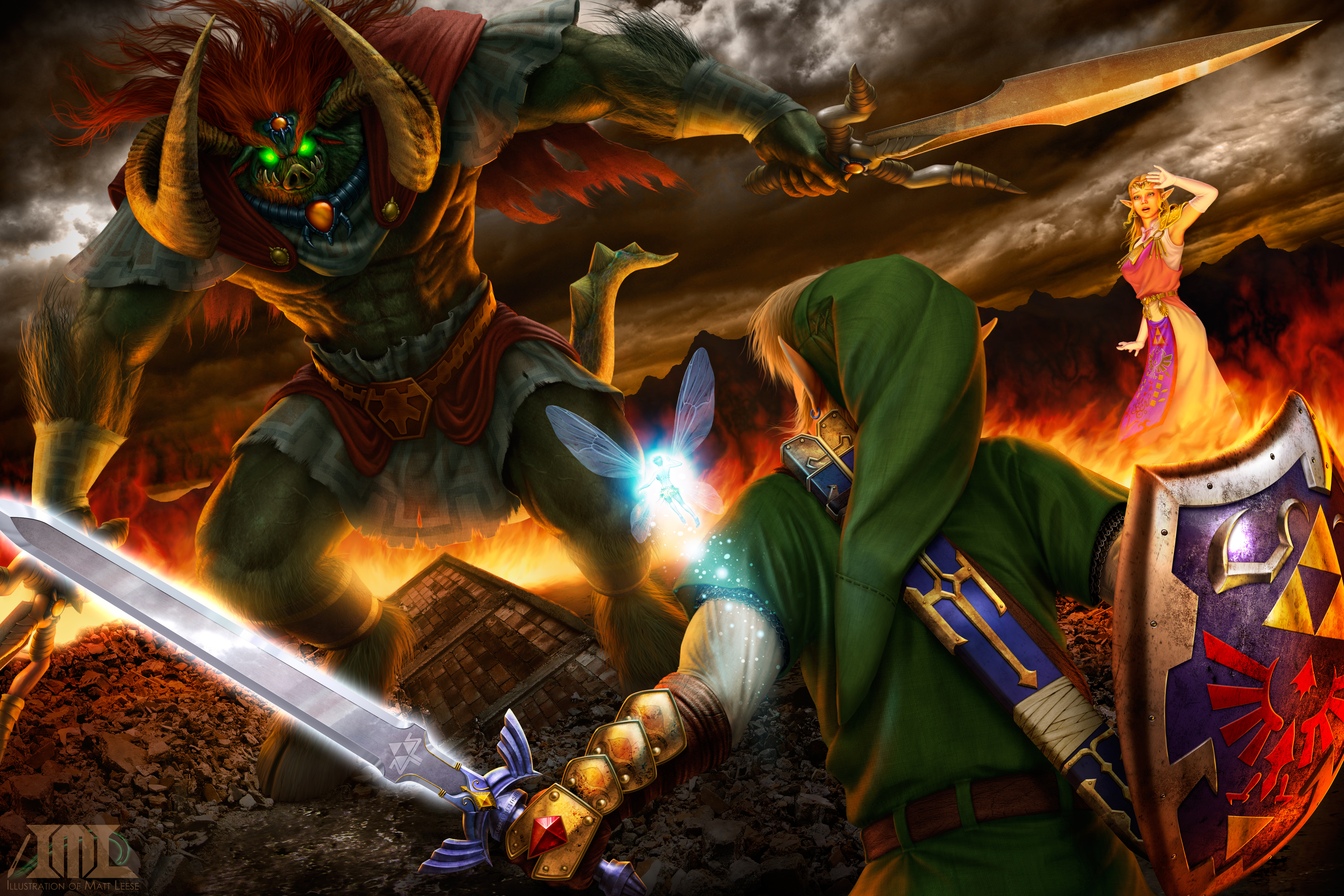 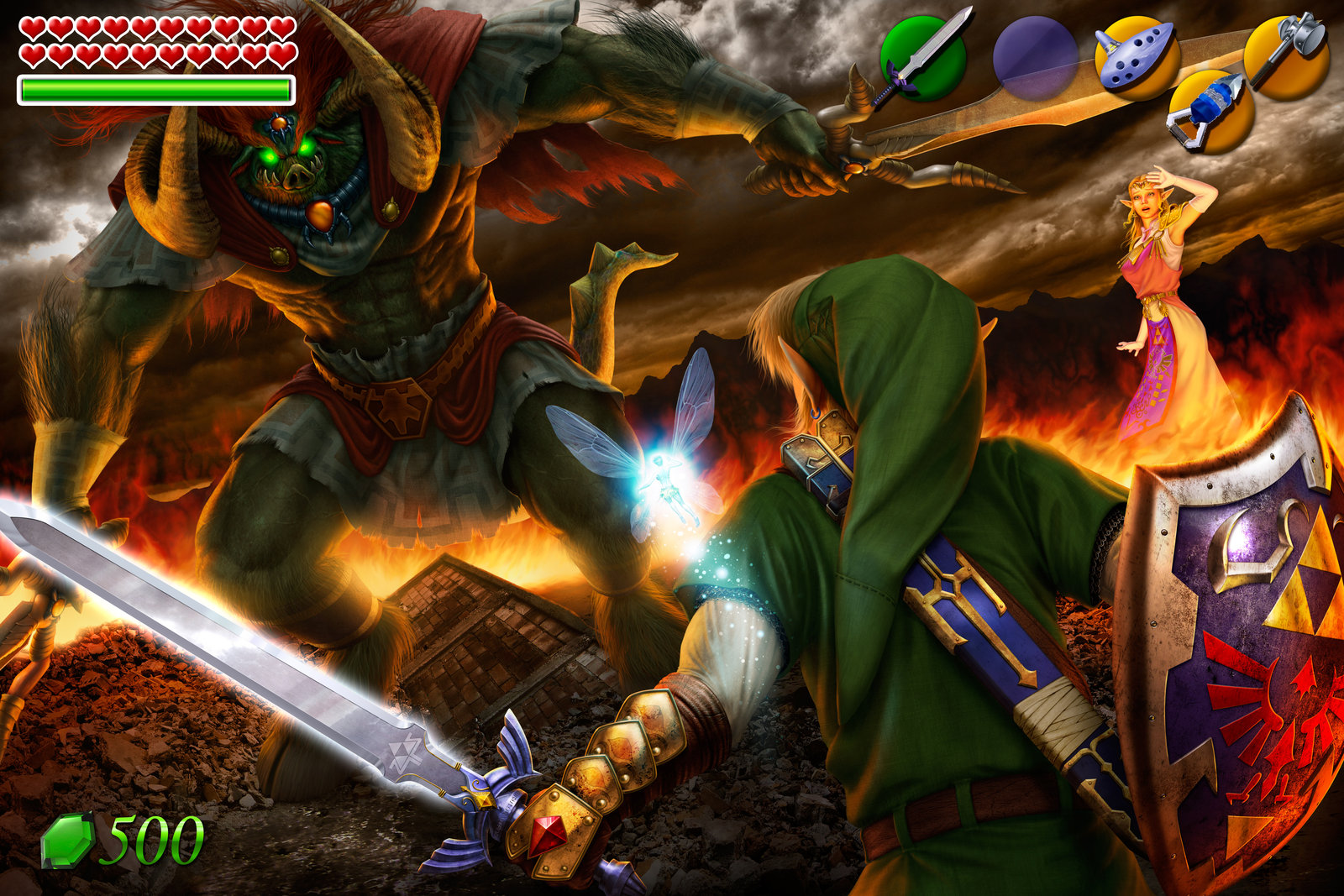 This is a piece that I have been somewhat actively working on since October, but have had limited time due to other work. However, it is also part of a series of pieces featuring the same scene. My last attempt done in 2005 was lacking in many areas including overall accuracy, and I felt that with the release of Skyward Sword, all of the 25th Anniversary Legend of Zelda stuff, and the excitement of putting together my own Dungeons & Dragons-style table-top Zelda game, it was about time to show off my skills again with a revival of this project. Another thing that also contributed to the creation of this piece was the release of high-resolution official artwork from Ocarina of Time, in particular, that of Ganon [link] . I could now get the accuracy I wanted and use the talent I had been honing throughout my time at the College for Creative Studies.

I cannot even fathom the number of hours I’ve spent on this, but it is considerable. The Master Sword and Hylian Shield alone took at least 20 hours each. I wasn’t going to settle for anything short of perfection this time around. Everything in this image I drew from the ground up except for the manipulated ground and sky textures, which were taken from photographs. I also used textures to enhance the quality of metal, leather, cloth, skin, and horns.

For the art critics looking at this, my desire was to portray the dread and anticipation of an epic battle with the King of Evil reborn as a demon. I think anyone who has played the game felt the same way when Ganondorf rose from the dead and transformed into a monstrous beast before their eyes. I’ve seen many other depictions of the battle that are more action-packed or stylized, but my primary goal was accuracy, providing a sense of nostalgia for that moment, and recreating it in a way that gamers imagined the battle looking in real life.

For you die-hard Zelda fans out there, you may notice a few things that are different. The Master Sword I used is the design from Twilight Princess / Skyward Sword, mostly because it just looks so much more epic and finished than the simple design from Ocarina of Time. Also, the scabbard is from the design of those games, but this is mostly due the fact that I feel that Nintendo has desired to make the new design canon (since that scabbard design is in games that take place before and after Ocarina chronologically). Link is also wearing chainmail beneath his green tunic, which I felt would probably be more likely for an adventurer who is somehow able to withstand many enemy strikes (and once again is present in TP / SS). Navi actually has a physical humanoid body, as opposed to a simple winged, glowing orb. Fairies are clearly seen to have humanoid bodies in most of the other games, as well as the Great Fairies within Ocarina, so I felt for realism’s sake, Navi should have a body. I attempted to give a little bit of a “forest fairy” flair to her, similar to the Great Fairies, but lesser. And finally, I added the Gerudo symbol to the Golden Gauntlets, mostly because they were admittedly rather plain and I felt that since the Silver Gauntlets were found in the Spirit Temple and Golden ones in Ganon’s Castle, they might be of ancient Gerudo origin themselves.

Were you in fact blown away by “Battle for the Triforce III”? Did it exceed your expectations? Feel free to let us know what you think of mattleese87’s fanart in the comments below!