Here at Zelda Dungeon, we recently reported on pre-order gifts from Greece and Germany. Today, we’ve got some information from Zelda Informer for those of you in Australia. When you pre-order Ocarina of Time 3D, you get a free poster and a $10 discount! The poster appears to be that of Link fighting Ganon, as we’ve seen in official art for the game. Also, if you’re curious about information relating to the Australian release date, hit the jump to see what we’ve been able to find. 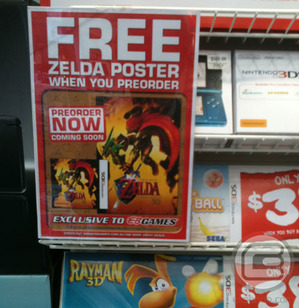 Unfortunately, the only information that we have concerning the release date for Australia is that it will be in June of 2011. However, there has been some speculation that it will be out on the 30th of June, based on an update at JB Hi-Fi, a site that sells games. As with most sites in America that have given potential release dates, like all of the ones that have been “revealed” for Skyward Sword, we shouldn’t rely on this information, until it is confirmed by Nintendo of Australia.

So, what do you think? If given the choice, and you live in America, would you take a $10 discount and a poster? Or would you rather have some of the gifts that we reported in the past? Lets us know in the comments!