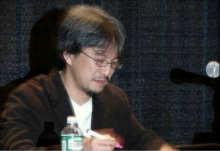 The recent release of the Hyrule Historia book has offered us an outstanding amount of information on the Zelda series. The only problem being it isn’t in English yet. Well Mases and our great friends at GlitterBerri have been trying to translate and peice together some of the answers hidden within this book. After many days of hard work and a lot of effort we now understand more about the Zelda series than previously imaginable.

One of the many things we have discovered in the translation is a special section written by Eiji Aonuma himself. In this section he talks about Hyrule Historia, Skyward Sword, and ends it by mentioning the next Zelda game of the series.

In particular, part 3, “Creative Traces,” contains several
documents that have never been shown to the public before. In order to
include them in this book, the staff that’s worked in the Zelda series
had to dig those old documents up like if they were hiding in the
deepest part of a dungeon. I really appreciate that.

Chapter 2, “The Full History of Hyrule,” arranges the series in chronological order so it’s easier to understand, but from the very beginning, Zelda games have been developed with the top priority of focusing on the game mechanics rather than the story. For example, in Ocarina of Time, the first installment of the series I was involved in, the main theme was how to create a game with pleasant controls in a 3D world. Or in the DS game, Phantom Hourglass, the focus was having comfortable stylus controls. Finally, in the most recent game, Skyward Sword, we focused on an easy way to swing the sword using the Wii motion plus. – Eiji Aonuma

While reading over “The Full History of Hyrule,” it’s possible that
some parts may look contradictory. For instance, the Mogma race or the
beetle item that appear on the very first story do not appear on any
other game that takes place in the future. I’d like to ask everyone
just to enjoy the book and to be broad-minded, and to think that those
parts are the way they are because of the way Zelda games are
developed.

The long sailing time of creating Skyward Sword, a game to celebrate the 25th anniversary of the Zelda series, has just come to an end. The voices of those who’ve played it from around the world reach us. We hear their admiration comments, and their criticism too. All those voices become energy for the next voyage. Well, to tell the truth, we’ve already set sail in a new voyage.

Above are some of what I found to be the more important issues addressed by Aonuma. You can read the full translation of everything he had to say along with plenty of other pages found in Hyrule Historia by heading over to GlitterBerri’s site to read all that we have translated so far. If your interested in helping out with translations, send an email to glitterberri.com@gmail.com.