An In-Depth Look at Faron Woods in Hyrule Warriors 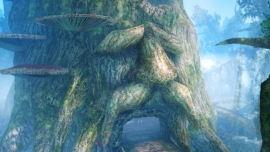 Warning: This post contains spoilers for Hyrule Warriors. Read at your own risk!

Here is a written summary of the third level of GameXplain’s six hour marathon stream of Hyrule Warriors!

Although the game recommends you to play as Link with the Fire Rod, chat voted for GameXplain to play as Sheik. The level starts with a cutscene with Link, Impa, and Sheik talking to Lana. I can’t read Japanese text, but I assume it’s about why Lana is even there.

Sheik’s playstyle is fast. Really fast. Her basic attacks are sharp, quick slashes with a kunai knife that overwhelms the enemy. However, they aren’t as powerful as other characters such as Link or Impa. Sheik can use the harp to unleash different abilities such as water tornado that stun/freeze enemies, a protective wind(?) shield that also damages enemies, and other moves depending on how much you press the light attack button according to the commentator. Her super move has her slashing countless times at the enemy with her kunai, then finishing the job with a music blast from her harp. This also sends the enemies in range away from Sheik. Her ultra move rhythmically pulls in and pushes out all surrounding enemies, causing many enemy deaths to happen. This is based on Skyward Sword‘s Harp mechanic where the player swings the Wii Remote back and forth to match the screen.

Almost as soon as we start walking, we see that a Deku Baba blocks any chance for you to continue on. [4:00] To get around this issue, you must find the Bow and Arrow. You find the it in a chest behind a tree nearby. [5:50]

The special enemies of this map are Redeads. Staying true to their core Zelda appearances, if you get near them, you’ll be scared and become unable to move. Though in this game, it seems they’ll only scare you when they create a radius of aura around them. Don’t get caught in the aura and you’ll be safe to wail on them. [8:00]

The forest caught on fire! Smokey would be much displeased. Not 100% sure how this changes the game outside of visual appearance, but burning forests are never a good sign. Find the Great Fairy to put it out! [19:00]

Attacking Cuccos will make swarms of them attack you, essentially creating a third army into the fray. Among the Cucco horde, there is a larger golden Cucco. Killing it seems to only give you a special material, much to the player’s displeasure. [19:30]

Gohma Appears! She may look scary, but she isn’t that tough of a fight. The tactic is to wait for her to use a eye laser attack, shoot her with an arrow while her eye is blue, then wail on her until her health bar is depleted. Be careful, she can fast travel around the map!

Relish in your victory against Gohma with a neat cutscene. Link looks upset about something and Lana looks worried about Link. Soon after you’ll be presented an animated cutscene that seems to be depicting the origin of Cia. [30:55]