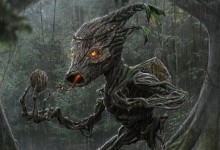 In January, Zelda Dungeon reported on a collection of incredibly realistic Zelda artwork produced by online artist Nate Hallinan including hyper-detailed depictions of a Goron and a Skulltula. At the time, Hallinan was working on a realistic re-imagining of the forest-dwelling Deku Scrub as well, having already produced a series of preliminary sketches. He recently put the finishing touches on his Deku Scrub painting, and it can be seen in full after the jump. 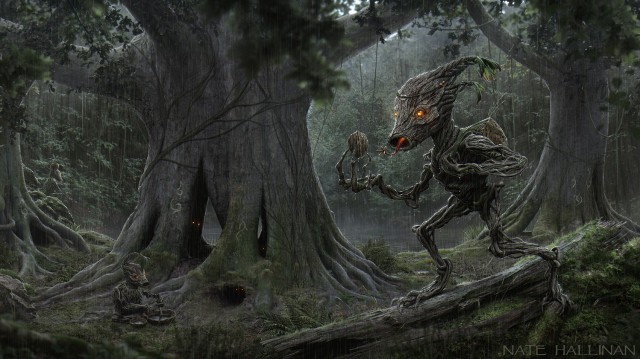 Hallinan has once again proven his mastery at illustrating Hyrule’s iconic fauna. Every twig that composes his Deku Scrub’s slender appendages is rendered in glorious detail. I especially love how he’s posed the creature with a sack slung over its back and a succulent Deku Nut griped in its claw-tipped fingers. The misty forest backdrop is no less impressive. It’s a matte painting masterpiece that truly looks like you could walk straight into it.

His initial Deku Scrub sketches also show clear creativity on his part. Each of his widely different draft designs for the reclusive woodland critters are as inventive as they are unsettling. 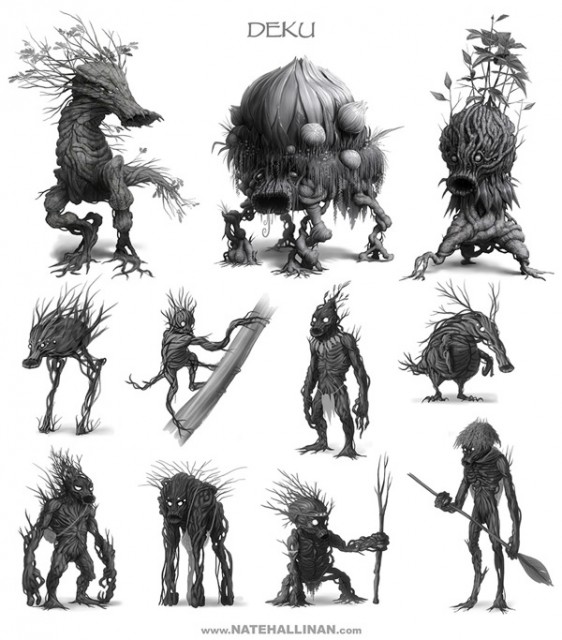 The Zelda series’s past efforts to produce realistic graphics have always fallen short, in my opinion. Nintendo’s Zelda developers have never fully embraced true-to-life graphics, preferring stylized approaches instead. Even Twilight Princess came across as a halfhearted attempt at realism, sporting characters designs with exaggerated anatomical proportions. Hallinan, however, has created a truly compelling concept of what the series could look like if it adopted realism wholeheartedly. His art combines weathered textures with twisted designs to create creatures that would be perfectly at home in Bethesda’s gritty Elder Scrolls series. And yet, none of them lose their distinct Zelda likeness when he paints them.

Even though I prefer my Zelda games to be bright and colorful, I have to give Hallinan props for his skill at bringing Nintendo’s fantasy creations to life. If we were ever to get a truly realistic-looking Zelda game, I would like nothing better than for it to take a cue from Hallinan’s Hyrule Bestiary.

Hallinan’s work is so detailed, the file size for his original Deku Scrub image exceeded the site’s maximum upload limit, and I had to downsize the resolution just to post it here. Naturally, you can see a full-scale version of it, and his other pieces -both Zelda-related and otherwise- by following the link to his website below.