Anju and Kafei: A Love Letter To The Greatest Side Quest of All Time 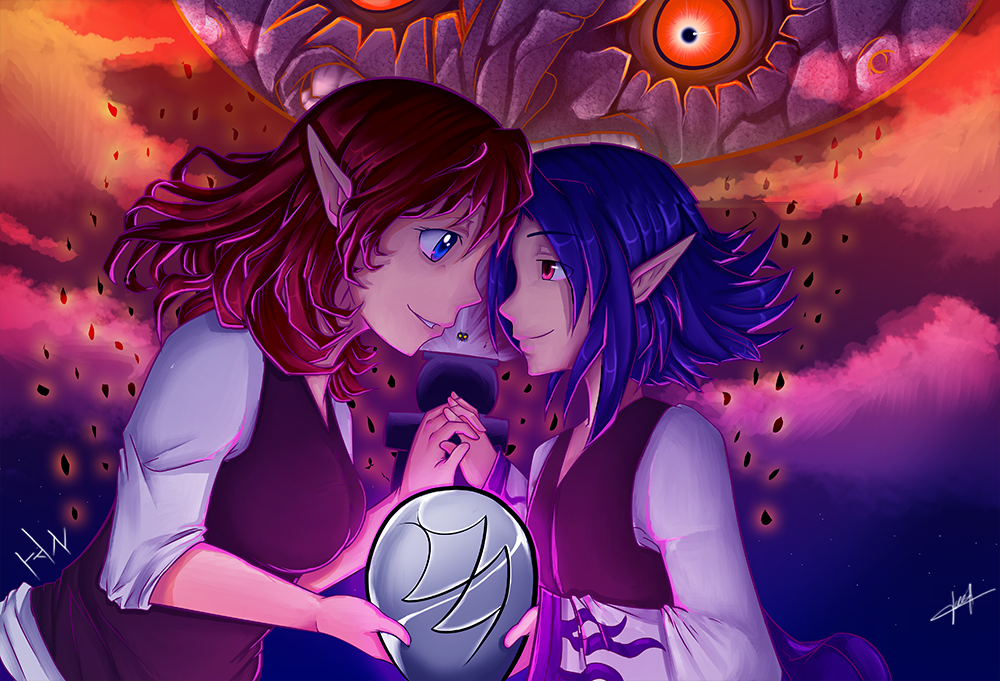 This editorial was originally published on February 29th, 2017

Side quests. Don’t let the title of this piece fool you; this won’t be just a simple love letter to my favorite side quest. This will also be a scathing note written by a jilted lover who’s been burned and worn out by side quests in the recent years, and is ready just to give up on them completely. But first, some context.

A few months ago, I was sitting in my living room at night after everyone else in the house had fallen asleep. ‘Perfect!’, I thought to myself. ‘Time to get some hours into Final Fantasy XV! Now, Final Fantasy XV was a great game so far, a real return to form for the series, and I was sitting at something like 35 hours played at that point. But I had barely advanced in the main quest because I was stuck doing side quests. And so it was on that fateful night, instead of saving the kingdom from evil, I was trying to catch a fish so I could feed a cat (all the while having Ocarina of Time deja vu). 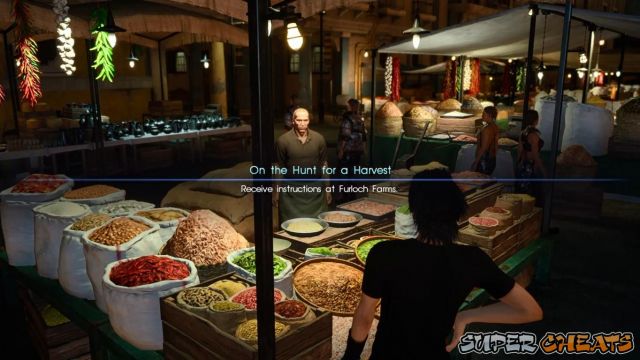 Now you might think to yourself, ‘well damn, if all you’re playing is the side missions, they must be pretty fun, right?’

The inner completionist in me was compelled to finish them because I can’t stand to have a overflowing queue of side missions. I’m doing them not because I want to, but because I have to. A little while back, I wrote an article explaining that there were some lessons that Skyrim could teach Breath of the Wild. One of those lessons revolved around my hope that instead of mind-numbing side quests, we would get something a little more original. I’m here to expand on that point even further.

I have played a ton of open world games in my time, and FFXV is far from the only lame-side-quests offender. Fallout 4, Metal Gear Solid V, Dragon Age, Xenoblade Chronicles X, Skyrim, Red Dead, Arkham Knight, the list of games goes on and on. You know what they all have in common? That 90% of these games have lazy, uninspired side quests that boil down to either “kill this” or “collect that”. There is something incredibly defeating about finishing a side quest (I had just grabbed some guy a bunch of vegetables as it turned out so he could sell them or something) only to have that same character IMMEDIATELY turn around and ask you to fetch him some more damn vegetables. Enough!

So in my despair that night a few months ago, I started to worry about Breath of the Wild and how I reeeeally didn’t want to be looking at a backlog of a hundred vegetable fetching quests I would be compelled to finish (and whether or not Breath of the Wild delivered on my hopes for new and innovative side quests is a different topic for a different day), when suddenly, like that jilted lover putting on their rose colored glasses and getting misty eyed, I thought about a particular side quest and smiled. In my despair, I had forgotten that The Legend of Zelda had given us possibly the greatest side quest ever: the Couple’s Mask. 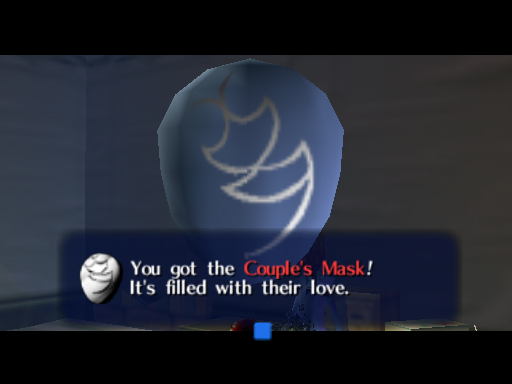 I’m sure we all know the quest, but I’ll give a little background for anyone that doesn’t. Back in 2000 when Majora’s Mask came out, the most intricate side quest you could undertake was the story of Anju and Kafei and their upcoming marriage. Ironically, they were supposed to tie the knot on the day that the Moon was scheduled to crash into Termina, but Kafei has suddenly gone missing and it’s up to Link to figure out why and help get these two back together.

Whenever I think of a great side quest, I always think of this one, even some 17 years later. I’ve thought about why that is, boiled down some of the reasons that it stands the test of time for me, and wanted to share them with you guys.

The first reason is variety. In games today, you will generally accept a quest, go to the designated spot on your map, kill/collect whatever you’re there for, and report back. Maybe there will be some light exploring, but let’s not push it. This quest is different. It takes full advantage of Majora’s Mask’s clever three day system to make you have to think out and plan exactly how you’re going to accomplish everything you need to. You need to talk to certain people at certain times or the quest has failed and you need to start over. You also need to be deliberate with your actions. For example, if Link stops the thief in North Clock Town on the first night, the quest is buggered because then the thief won’t come to the Curiosity Shop on the second night, and he won’t lead Kafei to his secret lair on the third.

Likewise, the quest involves a little bit of detective work, snooping around and talking to different people to understand what’s going on; a little bit of stealth, sneaking in and figuring out where the thief’s hideout was; and a little bit on teamwork. You actually control Kafei as the two of you need to work together to get through some traps. 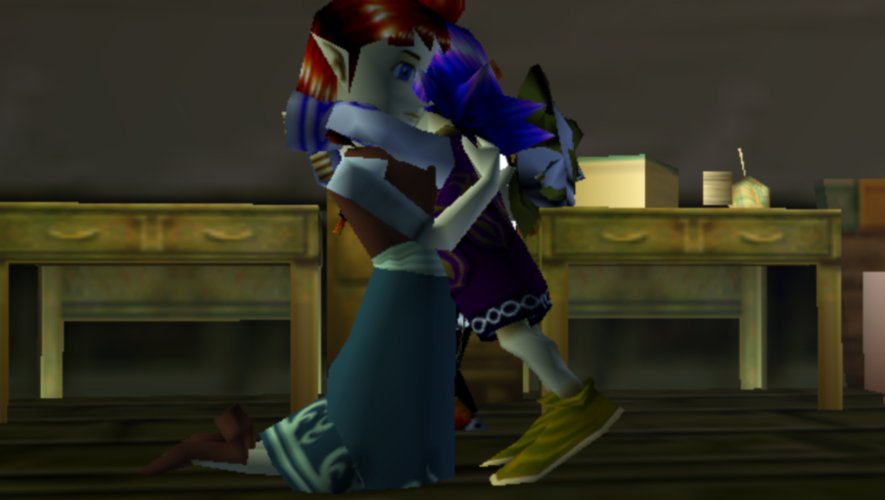 The second reason this quest works is incentive. Imagine if this quest just rewarded you with rupees. You might not be chomping at the bit to get it done considering you can collect rupees just by rolling around as a Goron pretty easily. This quest instead offers you multiple rewards at different stages as an incentive to finish it. By the time you’re all said and done, you should have netted yourself a bottle, a piece of heart, and four masks, which goes a long way towards the Fierce Deity mask. The quest even gives you incentive to do it a second time, as getting all of these rewards isn’t possible on the first play-through; another example of its variety.

The last reason this quest succeeds is perhaps the most important: it has purpose. Look, no offense to the vegetable guy from FFXV, he’s a nice enough guy just trying to make a living like the rest of us, but in the grand scheme of things, with everything that’s at stake, I don’t really don’t care if he gets his carrots or not. The best side quests give you a reason to push forward, and I can think of no better example than this. How touching is that final scene of Anju and Kafei, finally together again at last, professing their love for one another as the world is literally falling down around them. That moment made everything we went through to get there worth it.

It’s not just the couple that we get a chance to help either. During the quest, we help the duty-bound Postman find his purpose and his peace in his final hours delivering letters. We help Kafei’s mother find some closure about why her son would leave her like that. We even get a chance to give Sakon the thief a helping of cold, cold revenge for stealing the mask in the first place. The point is, we’re compelled to help all of these people on an emotional level because we care about them, and in doing so, it drives the narrative of the game forward.

I’m sure many of us have our own side quests that have a special place in our hearts, but for me, this will always be the big one. So the next time I’m feeling frazzled about having to perform another thankless bean fetching vegetable quest, I’ll think back to the story of Anju and Kafei and remember that sometimes, the extra effort can be worth it.

Agree with me about the state of side quests today? What are some of your favorite or items side quests of all time? Let me know in the comments below. Andy Spiteri is the Editor-In-Chief of Zelda Dungeon. For more fun and shenanigans, follow him on Twitter.

Comments
Sorted Under: Breath of the Wild, Editorials, Majora's Mask, Slider
Tagged With: No tags were found for this entry.