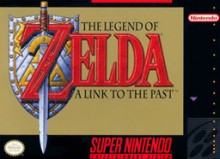 Today, the 13th of April marks the Anniversary of the release of The Legend of Zelda: A Link to the Past in the United States. This fact has left me thinking all day, and asking myself one question. How many Zelda fans have never played this title?

When this game was released it literally set the standard for so many others to follow, it was a huge success from the moment of its launch and brought Nintendo much critical acclaim. For some, this game could even be classified as the greatest game of all time.

After so much time has passed and the accessibility of this title, how many of you have yet to play?

Hit jump to join in on the discussion!

A Link to the Past was not the first Zelda game I ever played but I do feel it might have had the most impact and although it has been awhile I will never forget the way that I felt. From the second the music started to play, and the first sequence of the game began, I was hooked! There has been many Zelda titles since and although it is not my favorite in the series, I can’t deny the influence this game had on me and the gaming world in general.

This is why I have been asking myself all day; How many Zelda fans have never played A Link to The Past?

If that is the case for many of you; What stops you from playing?

Let us know in the comments below!

Comments
Sorted Under: A Link to the Past, The Legend of Zelda
Tagged With: anniversary, Zelda Anniversary