A History Of The Zora By Common Wealth Realm 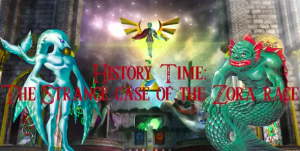 The Zora have been one of the most reoccurring races within The Legend of Zelda franchise, and as such can cause some to be a little confused about their history. We have seen the Zora as both friend and foe and depicted visually in numerous different ways. Because of their long history within the Zelda series it is easy to get a little confused as to their origin and when they can be trusted or not trusted. The YouTube channel Commonwealth Realm  has partnered with Anonymous Gamer and M. Productions to create an exceptionally detailed history of the Zora in the latest episode of a regular series called Zelda Unknown. The video is over forty-five minutes long and goes through every appearance of the Zora in the entire Zelda franchise. It is very detailed and worth a watch for any newcomer or Zelda veteran.

Head past the jump to check it out for yourselves!

This was a very detailed history of the Zora and hopefully it was something that helped those that might have been a little confused about their origin and place within the Zelda franchise. There are several other episodes of Zelda Unknown that you might want to check out, so head on over to Commonwealth Realm’s YouTube channel and see what you think.

Did you learn anything new about the Zora? How do you think they did with staying true to the history of the Zora? Share your thoughts in the comments below.