3DS Owner Mods His 3DS To Work With A GameCube Controller 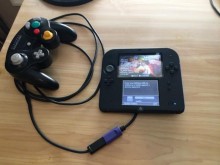 Super Smash Bros. for 3DS has been released in Japan for almost a month now (and it’s nearing it’s release in North America), and Japanese fans have found many reasons why owning Super Smash Bros. on their 3DS could result in good, or bad things. Recently, a 3DS owner decided that he needed another control scheme, and rigged his 3DS to work with a GameCube controller.

Hit the jump to see more!

What do you think? If it were an option available to everyone, would you use this? Or is it unnecessary? Will you be using a GameCube controller on the Wii U version? Let us know in the comments below!

Heyo. My name’s Liam! And I’m a huge Zelda fanatic. Ever since I was a kid, I’ve been in love with Zelda’s rich stories and adventures. My favorite Zelda game is Wind Waker, and I show much love for all others, as well.