1up’s Lunch Break – The Legend of Zelda: A Groose To The Past_Pt.2 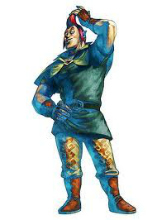 Last week 1up began their own little “Lets Play” of The Legend of Zelda: A Groose to the past. They started their adventure off naming the hero after the fan favorite Skyward Sword character, Groose. Trying to take on as much of the game as they can without too many mess ups.

They will be recording a video and releasing it once a week. This week is part 2 in what I expect to be at least a 7 part series. Be sure to make the jump to check out this humorous and entertaining video for yourself.

1up’s playthrough of A Link to the Past reminds me of GameInformer’s Super Replay of The First Legend of Zelda for the NES. They both have interesting and humorous conversations as well as entertaining gameplay. Let us know what you think of part two of their Lets Play in the comments below.

Source: 1up VIA GoNintendo