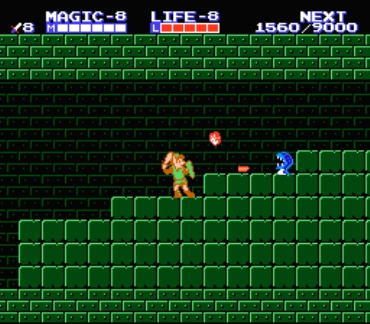 The website 1Up features a “Virtual Console review” of The Adventure of Link which brings up a lot of great questions about the game. They feel that the game had controls which were not so great, that the music wasn’t as good as that in the other games, and to summarize: it simply didn’t hold up to quality of the eventual series.

More on their controversial stance after the jump!

The Adventure of Link is the second title in the Zelda series. The game takes off where the first one ended with Link learning that Zelda from the first game wasn’t the real one–that Zelda was just one in a long line of royal females with that name. The “real” Zelda is under a sleeping curse by an evil wizard. Now Link must find the Triforce of Courage to break the spell that was put on Zelda and rescue Hyrule once again.

The Adventure of Link was different from the first game in some key ways–for instance, it added more of an RPG feel and took away the overhead view, replacing it with side scrolling and platforming. They added in experience points and you could upgrade Link’s Attack, Stamina, and Magic. 1Up feels that the overall difficulty of the game was excruciating and that the game’s combat was “slippery” and unuseful sometimes, especially when fighting the Iron Knuckles. A multiple lives system was added so that when you run out of lives you start back at the beginning castle and you lose all experience.

There is no doubt that this game was hard but the question is do you still think it’s worthy of the Zelda title? Or do you think it was too far different? Let us know in the comments!